Over the course of his career Wilcox developed and employed a range of different techniques with paint as well as styles of painting.  Since he rarely kept notes on how these techniques were developed the process of understanding and documenting how he worked in these styles is only now beginning.  Scientific analysis and documentation of some of his techniques have been undertaken through the Conservation Studio of the Dallas Museum of Art and the study of his body of work continues to shed new light on his varied styles and the techniques he employed.

Cataloguing and examining the materials and tools Wilcox used is a critical component in understanding just how he carried out the techniques he used to achieve the results seen in the works themselves.  This discussion focusses on a style of painting he pursued and its evolution to the etching of shapes on canvas.

Beginning the early 1990’s Wilcox began to work with a technique involving acrylic in which he would meticulously apply a single layer of paint using a squeegee, allow the paint to dry, and then carefully sand the surface using various grades of sandpaper.  Wilcox would repeat the same process sometimes up to thirty-five times, carefully calculating the time needed for each layer of paint to dry.  Each canvas worked this way might take several months. The result was a dense, monochromatic surface that held a unique luster and richness and sense of depth.  Early examples of this work include, Prayer No. 2, 1990 and Resurrection, 1991. 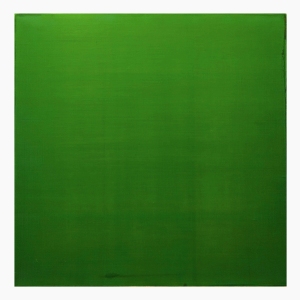 Starting in 2006 Wilcox combined this technique with the introduction of shapes etched into the monochromatic surface.  This represented a major shift in his style of work, both in terms of form and color. His previous use of grids in earlier paintings gave way to simple, non-liner, fluid shapes etched into the canvas.  The process was time consuming.  It required months to create the monochromatic canvas and then the painstaking work of etching would begin, exposing the underlying color beneath the layers of paint. Most often the underlying color at the base of the canvas was white, but he experimented with other colors as well.  Examples of this style include Arena, 2006; Sprinkler, 2006; Shell, 2007; Cotton Bowl, 2007; and Three Flags Over Texas: España, Republic and Confederacy, 2008.

Wilcox collected a variety of awls for etching these canvases.  He also used ice picks and would flatten and file the tip of the pick to achieve the width he needed for the etched lines on the canvas. The etching involved repeated strokes to remove the dense, hardened acrylic as well as a certain delicacy to ensure the underlying color on the canvas was able to show through.  In these works, the thickness of the layers of paint determined the depth of the etching and thus added to the dimensionality of the work itself.  Below are some of the awls and the file Wilcox used to sharpen and shape the awls. Also pictured are remnants of sandpaper he would use to sand the paintings and a collection of his brushes and squeegees he used while doing these works to evenly draw the paint across the canvas. 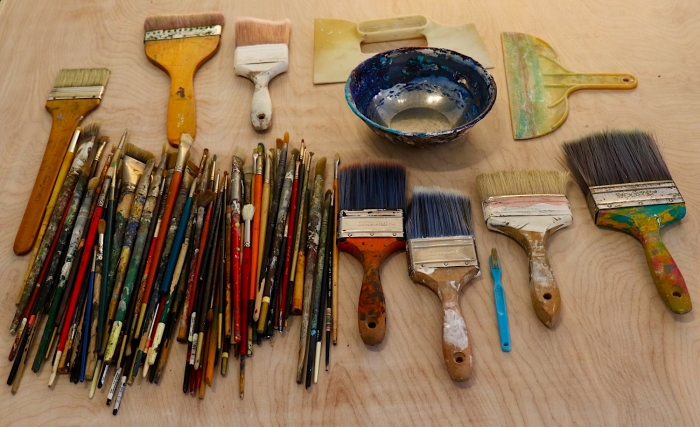